The Return of the WaHo All-Star Challenge

The eating contest of all eating contests will return this May as Tucker's Tales sponsors the 2011 WaHo MVP All-Star Challenge.  A May tradition unlike any other, the WaHo challenge has only occurred twice but has two very famous names as winners.  Below are the rules and the history of the WaHo MVP All-Star Challenge.  Continue to check back, as the current participants will continue to be updated! 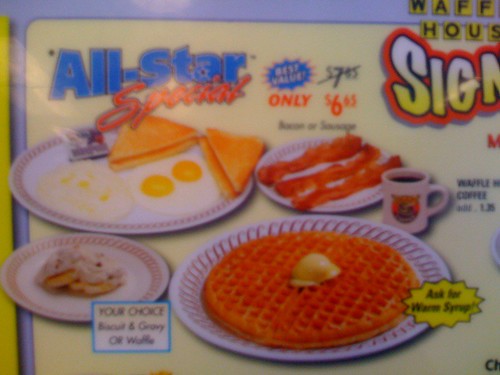 These are on the rules on the offical "MVP All-Star Challenge" competitor contract (you read that correctly).

2. Competitors can order the food in whatever manner they want as long as it contains:

3. Competitors may order more than one beverage, however they must finish everything they order before time can stop.

4. Competitors will sit at their own table, if not possible, then they will eat head to head.

5. Competitors may not start eating until all food is on the table.

6. Each competitor will have someone as a designated timer for them. Time will start when the respective competitor picks up their first piece of food or utensil.

7. When a competitor decides they have finished, their timer will stop the the watch and an neutral judge will decide if the meal has been finished.

8. The competitor who eats the MVP All-Star breakfast in the fastest manner will be declared the winner and the 2011 Undisputed WaHo MVP Champion.

9. Trash talking and Inappropriate gestures are both legal and encouraged.

10. If any competitor is caught scraping food under the table or giving it to a "designated eater," they will be disqualified.

11. "Reversal of Fortune" Clause: If one competitor vomits during the competition, it will be an automatic disqualification.

In the during the May Term of my freshman year, a challenge of epic proportions took place.  A battle between "The Ocho" Richmond Bramblet and "The WaHo Goddess" Lucie Hartmann.  The contest was to see who could eat the Waffle House MVP All Star breakfast in the fastest time possible.  After weeks of trash talking and "dry-runs," with a time of 11:13, I reigned supreme.  I was the first ever, Undisputed WaHo All-Star Champion.

In the summer of 2005, I was working at iSoldIt, an ebay store on Richmond Road and across the street was Waffle House.  One afternoon, I wanted lunch from Waffle House, and when I got there I couldn't believe what I saw and took this picture: 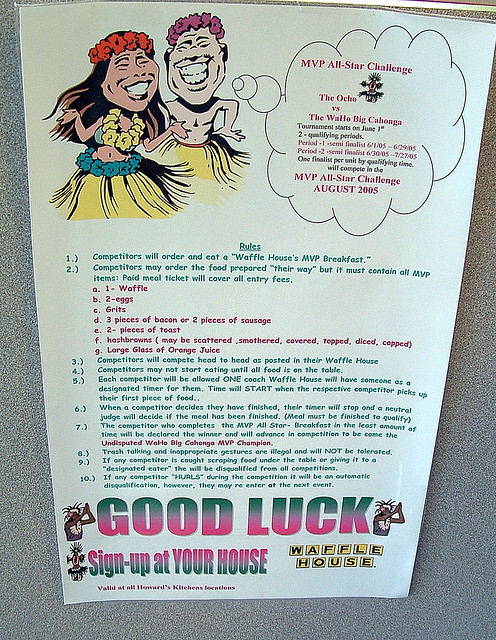 A worker at Waffle House had stolen the contract we had used for the challenge to make a challenge of their own.  How did I know that this was stolen from our contract?  If you take a look at the upper right hand corner it says "MVP All Star Challenge" The Ocho (my nickname from college, I was good at obscure sports) vs. The WaHo Big Cahonga (Lucie Hartmann had deemed herself the "WaHo Goddess" and Waffle House apparently didn't want to use the word Goddess.)  Waffle House also apparently found it to not be in the best interest for competitors to taunt or use inappropriate gestures.

From what we can remember, a waitress on the night we did the first competition asked if she could see a contract, and never returned it.  I tried to milk it for what it was worth, at least some free meals, even having someone talk to the owner of the participating Waffle Houses, but never got anything out of it.  I'm still bitter to this day.

My sophomore year, we decided to expand the field to four competitors.  "The Ocho" Richmond Bramblet v. Ally Tucker v. Liz Meredith v. Carl Reuff.  This contest was almost not even a contest as our fearless leader, Ally Tucker smashed the competition with a time of around eight minutes.  If anyone reading this knows the official time, let me know please!

Five years later the WaHo MVP All-Star Challenge makes its return.  While no competitors have been named, with the platform of Tucker's Tales, I imagine we will have the best competition yet.  Now, I would like to see between 4-8 competitors this year.  The first spots are open to any Tucker's Tales contributor that would like to participate, then we will expand the field to readers.

Get excited, because the WaHo challenge is returning.  Write in the comments if you want to participate and we will start filling the slots!