In Which Kristen Clones Herself

The pool was stellar! 1st we went to Eunice's house for awhileand had lunch.THen we went to the pool. After that, we went Zany Brainy. I bought an address book.

@ soccer camp I won a contest. I was in a group w/ Caroline Hamilton and a girl from Eunice's soccer team, Lauren. There's a funky t-shirt contest tomorrow. I'm not entering. Tomorrow the coaches are setting up the Slip 'n' Slip. My coach (Heather) has an identical twin, Mary.

I got sunburned real bad on my head, chest, face, and shoulders!

I think that's all. Bye!

Rachel's on a soccer team (the Iguanas) w/ 2 girls she knows.

Watched Dad's T.V. interview about tennis. He ended it by saying: "This year was too hot, Next year, I'm playing chess."

Eunice and I did "makeover" today.

Double P.S. Got an invitation to Laura Beth Rider's birthday party. It's at Spindletop.

Went to shoot-out again. Didn't score any, though. Eunice won for the girls. How ironic.

The news is going to interview yours truly for an article about the Ecton Cleanup. We're getting new area codes.

Backstreet boys are having a concert @ Rupp Arena. Mom said she could get tickets, but I don't really want to go.

Bulletin: Tomorrow, after weeks of anticipation, I FINALLY find out which teacher I get. AAAUUUGGGHHH!

I'm in Glover's class w/ everyone in our group... cept Debbie.

Went to Woodsend Bend w/ Melissa. Looked 4 deer and saw tons! A little fawn kept walking toward me and Mel... It was like magic. We're gonna write a book about a girl and her baby deer.

You LOST a million times.

@ Woodsend Bend today Melissa accidentally scratched me on the shoulder. And scratched some skin off!

I want to be different. So from now on, whenever I don't feel like myself, I'll BE someone else.

They (ABCDEFGH) are now my clones. Why? I want to be DIFFERENT! Clones are different. Aren't they?

What about moi, your twin?

You're my twin no matter what.

The only thing I really have to explain my abrupt cloning of myself is that I completely stole the idea from a book I was reading at the time. I swear. It was called "I.D" and was part of a sci fi series called "Watchers" by Peter Lerangis. You can look it up. They were actually really good books. Here's the link-

And the extraordinarily creepy cover: 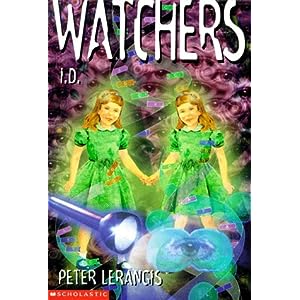 Reply Ally Tucker
10:44 PM on April 16, 2011
1) Reading this makes me understand what it must feel like to be ADHD and jump from 1 thing to the next at a rapid pace
2) The whole little/big unknown age thing was bizarre
3) Is Bryann just Bryan w/ an extra "N" or pronounced Bee-Ann?
4) Eve is really perplexing....normal, but different? Jumbo shrimp?
5) I feel like a really touching moment happened at the end there between you and your twin....
6) Good God you were (are? unknown? age 21/22) weird