I use MS Visio a lot in my work and find it very handy for doing quick layouts and especially doing things like the above (what we once used to call "Xerox engineering"). When I was a young engineer I was told that "everything works if you don't draw it to scale" and it's a lesson well worth taking onboard.

1) Switch out original SELDEN in-mast furling system to a standard SELDEN mast with slab reefing. While I'm comfortable with the in-mast furling arrangement for coastal sailing I consider the risks of the sail jamming during furling to be too high during ocean crossings.

At my age I have no desire to go up a mast and cut a sail away while in mid-ocean. Additionally, in winds over 25kts the sail can, whilst being rolled in, suddenly and completely unfurl - this is because there appears to be insuffient friction exerted by the "endless" furling line on the furling winch mechanism.

The new rig and sail provide for the first reef to be put in at the mast (i.e. slab-reefing) with single-line reefing from the cockpit for the second and third reefs. The main halyard has been "doubled" to reduce effort required to raise the mainsail (completed).

2) Replace one Andersen 28 halyard winch on mast with an Andersen 28ST (I.e. self-tailing) to facilitate putting in the first reef at the mast (completed).

4) Replace "Solent" stay with a permanent inner-forestay stay with roller-furling jib. Original hank-on jib has been re-cut to match the Furlex roller-furler. (completed)

Note: All RCBO devices fitted are "Type A" (responsive to AC earth leakage, and also to half-wave-pulse earth leakage which can be caused by faults in equipment containing rectifying diodes).

1) Install a DIGITAL YACHT AIS1000 Class B transponder with a WLN10 wireless NMEA server. This allows AIS data to be overlaid on the lap-top chart plotter software ("Software OnBoard" from DIGIBOAT) and, given the wireless link, allow the laptop to be used for AIS anywhere on the boat. Recently tested - Sept 2011 - in the English Channel shipping lanes in fog with less than 100m visibility. 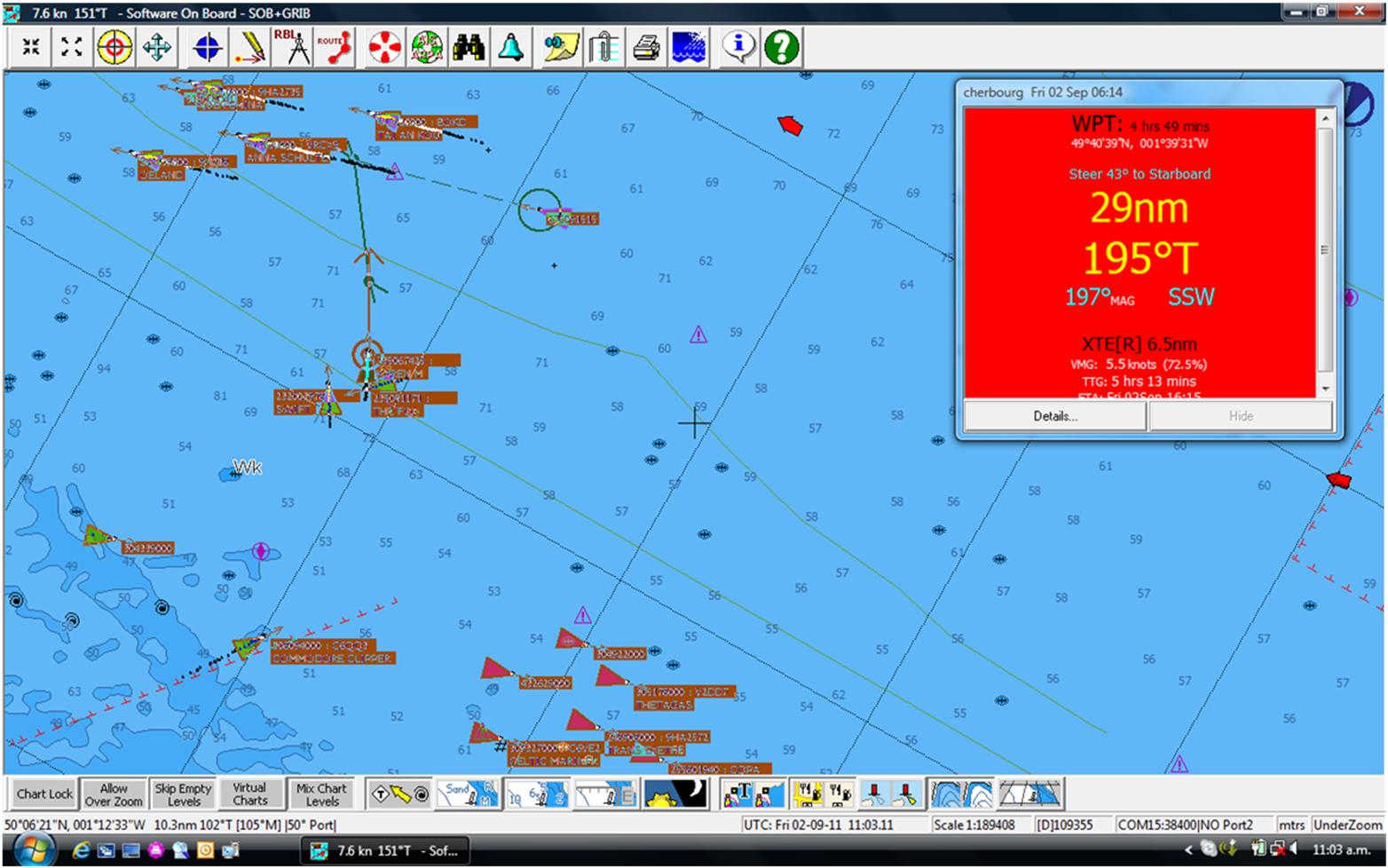 2) Install an IRIDIUM 9575 ("Extreme") phone for email, weather forecasts and communication. Unlike the ealier Iridium phones this one allows communication directly with the PC via a USB cable. The phone is GPS-enabled and has an "SOS" programmable emergency alert function (completed).

3) Upgrade the outside steering station RAYMARINE RL70C chartplotter with a RAYMARINE e7 multi-function display. The RL70C chartplotters are no longer supported by RAYMARINE and do not display AIS data. This upgrade has also required the radar to be upgraded and a RAYMARINE digital radar (Model 418D) has been installed (completed).

4) Install a panel-mounted PC at inside steering station. As noted above I have been using a laptop PC as a back-up for the chartplotter and to display AIS. The insided steering station RL70C chart-plotter has not really been used inasmuch as it was normally hidden behind the laptop's screen and so there was little point in upgrading it to an e7. Having a built-in PC frees up the nav station desk-top.

The PC I've installed is a NEXCOM APPC 1230T with solid state hard-drive. This has a 12.1 inch, touch-screen, sun-light viewable display and operates off 12VDC. The PC runs the navigation program "Software Onboard" by Digiboat. AIS (including GPS) data is provided to the PC by the Digital Yacht AIS unit.

The PC is powered via a SAMLEX IDC-100 DC-DC converter providing an output voltage of 12.5VDC from an input range of 9 - 18VDC

The keyboard with built-in touch-pad communicates wirelessly with the PC and is a very nifty KEYSONIC ACK-540RF (completed).

5) Install an ISLAND TIME "Power-Over-Ethernet" WiFi booster. This system utilses a UBIQUITI "Bullet" radio and connects to the PC via a LAN connection (completed).

1) The boat came with an ice-maker. The switch to 240vac power meant that this would need to be replaced. With all due respect to my American friends an ice-maker was not high on my list of "must haves". The space freed up is now a wine/liquor cabinet - definitely an upgrade (completed)

1) The galley has a "Force 10" 3-burner gas stove. As the "GasCheck" man said "these are top of the line stoves". They may well be but they are poorly engineered and oven temperature is difficult to control (even with a new thermostat fitted!).

Apartments in China generally do not have ovens. If the Chinese want to eat roasted meat they eat out. Cooking at home generally is limited to a wok and rice cooker. Western cooking requires an oven and, while trying to figure out how I could overcome this kitchen deficiency, I came across a discussion on "CruisersForum" around using halogen ovens. I had previously thought these were gimmicks marketed on late-night cable TV ("... but wait, there's more ...") but the reviews were generally positive and, at around $US100 per oven, there wasn't a huge financial risk and so I purchased a halogen oven (also known as a "turbo oven").

I have to say I am mightily impressed.

It cooks quickly, with a minimum of fuss and "self cleans".

If you've got plenty of electricity - shore-power, genset - I recommend it.

There are two added advantages:

ii) it doesn't turn the boat into a sauna while cooking (completed).

"No knead" bread from the halogen oven.  A "rustic" style loaf. Absolutely delicious and keeps for three days.

1) When replacing the length markers on the anchor chain I discovered that the chain was only a little over 70 m (230 ft) effective length rather than the 100 m (330 ft) I thought it was. The chain will be lengthened to 100 m. The additional chain will be connected with a CROSBY "missing link" (completed)

2) Current Delta 55 lb anchor replaced with a 60lb MANSON "Boss" - somewhat difficult to believe this is only 5 lbs (2.3 kg) bigger than the Delta anchor it replaced - see photo below (completed).

In 2017 I had a yard in Portugal replace the original shaft seal (i.e. compression nut and packing) with a PSS "dripless" seal.

From the log: "Tried to start the engine but it wouldn’t turned over. Checked everything out as best I could and then to my horror noticed water dribbling out of the engine air intake. Shut the engine raw-water seacock but the water continued to flow out of the air intake. Over the winter I had had the yard replace the original drive shaft seal with a modern “dripless” seal. The PSS brand has a very good reputation and is widely used. The yard installed the seal and connected the seal’s vent line into the engine exhaust sea-water line. Unfortunately they didn’t follow the manufacturer’s instructions and fit a siphon breaker into this vent line as required when its connection to the sea-water line is below the boat’s waterline and so now it would appear that seawater has flooded the engine!!"