Please feel to share the articles and photos with proper acknowledgement. Thank you. lrs

PRESENTED BY LAWRENCE RAMIREZ SIFU founder of the

An informational program for teens entering 6th through 12th grade

• A brief history of martial arts Pacific Wing Chun held the Safety-Awareness and Personal Protection Seminar on April 11th at Kealakehe High School in Kailua Kona, Hawaii. Thank you and Mahalo Nui to all whom volunteered. Thank you and Mahalo Nui to visiting Sifu Sean Cavanaugh from Hawaii Wing Chun Kung Fu Association, WA., Sifu Kadang, Sifu Verble and all Kealakehe High School teachers whom helped. This seminar was all part of a Senior Project coordinated by M... 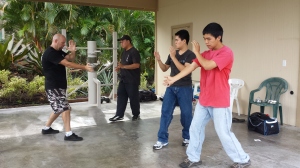 Qi Gong is an integral part of Wing Chun. We reap the benefits of it through cultivation of vital energy, and also from the increased effectiveness of our breathing on our physiology. When we practice Sil Nim Tao, we are training our mind and our bodies, part of which includes the breathing technique. My Sifu and Sigung both taught me the importance of breathing as one of the tw... Solid day of testing Chi Sao and Intercepting skill. Please congratulate Mike Pollard he has been awarded a Black Sash for his hard work and dedication in study and practice. He has the skill of a warrior and will continue his testing this month for his certification as an Instructor of Wing Chun Kung Fu

From everyone here at Pacific Wing Chun Congratulations Quinn earning the White Shirt for preforming Siu Nim Tao. I would like to let everyone know Quinn has been with us for a little under three weeks. His natural skill and abilities will help him progress quickly and with a little more time I know his Kung Fu will grow strong and root deeply within his life and this Wing Chun family.

Aloha and much respect everyone! lrs

The dragons are spirits of the waters. “The dragon is a kind of being whose miraculous changes are inscrutable.” In a sense the dragon is the type of a man, self-controlled, and with powers that verge upon the supernatural. In China the dragon, except as noted below, is not a power fo...

Throughout the years since the Bodhidharma traveled to China and Shaolin Temple at the foot of Shaoshi mountain in the Song mountain range in the Henan province, where Kung Fu began, there have been those whom study martial arts, but were never worthy of receiving such training in the first place.

These people reside in the lower four worlds of life:

"Hell--a condition of despair in which one is c...